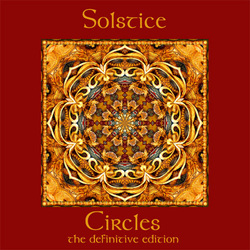 BUY CIRCLES    READ REVIEW
New Life, in finally offering studio versions of hitherto unreleased stage favourites that didn't make it onto the debut, in some ways marked the close of a chapter. With 1997's Circles, the band moved forward with a set of new material.

Framed by two meditative instrumentals, Salu and Coming Home, Circles is perhaps the most impassioned Solstice album, the title track being a case in point. A bustling musical energy crackles beneath lyrics concerning individual and communal spirituality, but this is no utopian fantasy, being firmly grounded by samples of radio reports of the violent confrontations of Stonehenge 1985. The theme continues throughout the album, with the necessity for change rooted in the political and ecological chaos of the end of the twentieth century. Fronted by Emma Brown, perhaps their strongest vocalist to date, the band had never sounded so powerful on disc. Bolstered by ex-Jethro Tull drummer Clive Bunker, the sound produced is full, dynamic and committed. This is an album of real concern about the mess we're making of our planet, lifted up by the celebration of human potential to change.
Oz Hardwick