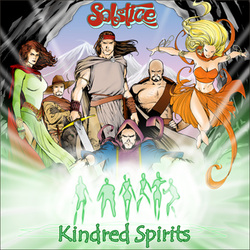 
After the CD with bonus DVD, where next? Well, how about a DVD with a bonus CD? Housed in a striking Barry Kitson cover, it’s actually the first time that successive Solstice albums have featured the same line-up(!), and the DVD sees a return to the Pitz Club for the Spirit launch gig in March 2010. Perversely eschewing the title track, the rest of the album is performed in a high-energy spirit of celebration. Energy cracks and fizzes, and ‘Here & Now’ in particular proves itself to be a set highlight, along with classics like ‘Cheyenne’ and ‘Sacred Run’. By way of an added extra, a couple of tracks from Loreley Amphitheatre – ‘New Life’ and ‘Brave New World’ – round off the visual delights.

However good a DVD may be, though, it’s always the album that gets the most the most play, and this selection of recordings from 2007 and 2008 is a goodie. Drawing from earlier material not featured in the Pitz set, this shows the current band putting their stamp on the Solstice back catalogue. Most striking is Jenny Newman’s circling fiddle figures on ‘Earthsong’, but there are subtle shifts of nuance throughout, with each member adding their own colours to the patterns of the music. The performances are outstanding, with ‘Medicine’ in particular guaranteed to bring a lump to the throat.

However, lest it’s all sounding a bit too serious, the disc spins on after the listed tracks for a medley of sing-a-long silliness. Don’t ask me what’s included, though, as I won’t tell you, won’t tell you…

A month or so before Kindred Spirits was due to be pressed Andy got an email from someone saying how much they were enjoying their recently purchased copy of Spirit. That someone turned out to be veteran Marvel artist and prog fan, Barry Kitson. The result of this moment of synchronicity is the brilliant art that runs through the album. Barry is a phenomenal artist and lovely bloke - we are greatly indebted to him. Pete and Rob have been in a state of rapture ever since! Take a look at how Barry developed the images here.

Another discovery that preceded the release of Kindred Spirits was the discovery that Steven Wilson of Porcupine Tree/ Blackfield is a Solstice fan. Steven very kindly agreed to contribute to the sleeve notes and his 'chat' with Festival Music's David Robinson fills a couple of pages of the booklet.
Read it here