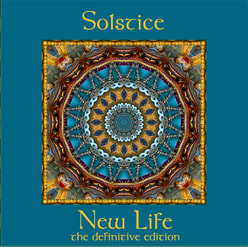 BUY NEW LIFE    READ REVIEWS
'Listening to Morning Light as I travel across the Sydney Harbour Bridge and the sun rises over the top of the Opera House. Couldn't think of a better soundtrack.Thanks for the great music'
26/02/2010, at 7:09 AM Rob, Sydney, Australia.

Some seven years after the band split (not counting an all-hands-on-deck one-off reunion in 1986), a fair number of double-takes were occasioned by the unheralded appearance of New Life in the mail order lists of GFT and other specialist music dealers. But it was, indeed, more than a mere flashback - Solstice had resurfaced.

With Andy Glass at the controls, the production was much closer to the live sound than on Silent Dance, with a fuller dynamic doing justice to bassist Craig Sunderland, adding depth and power to the stage favourites that hadn't made it onto the debut. The lavish swathes of keyboards are still present, but Marc Elton's violin is more prominent, blending with Andy's guitar to frame Heidi Kemp's commanding vocals.

A stunning album throughout, the cornerstones are the two epics, Guardian and Journey, tapestries of mood and colour which move from the meditative to the exuberant with a confidence that encompasses all the diverse elements which combine to make Solstice's music unique.
Oz Harwick