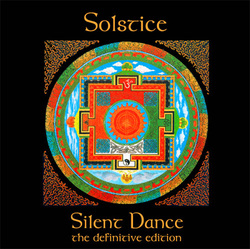 "ALBUMS THAT SAVED PROG"       BUY SILENT DANCE      READ REVIEWS
By the time the debut album was recorded, Solstice were already seasoned veterans of countless gigs throughout Britain, being staples of the then-thriving club and university circuit and equally at home on the stages of major festivals. It is striking, then, that Silent Dance is so emphatically a studio album. From the staccato opening of Peace to the jazz-tinged coda of Find Yourself, the album has a glacial quality. The rough, folky edges were replaced by a sleek ambience, sometimes intimate (Earthsong), elsewhere thrillingly expansive (Sunrise). Mark Elton's violin was reigned in as atmospheric keyboards gained prominence, generally leaving centre stage to Sandy Leigh's vocals and Andy Glass's guitar. Dynamic foundations are provided by Martin Wright's percussion and Mark Hawkins' bass, though the one criticism of the album is that this latter lacks presence in the mix.

As with the best of their peers, this confident and unique album proved that "The Progressive Rock Revival" was merely shorthand journalese for music that defied categories.