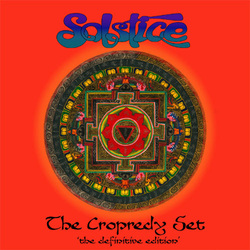 BUY THE CROPREDY SET    READ REVIEW
Thirteen years after the brace of sell-out farewell concerts at London's legendary Marquee club, it was finally time to release a live album. And, given the subsequent demolition of the old Marquee, what better location for such a recording than a festival stage? The venue was Cropredy, Fairport Convention's annual celebration of the finest in folk, rock and the hybrid beasts in between. The sun shone on a huge crowd as Solstice, now augmented by Jenny Newman on violin, Robin Phillips on bass and Steve McDaniel on keyboards, took the stage for a set that began with a sequence of old favourites before concentrating on newer material. Most of these were from the then-recent Circles album, but there was also space for a band version of Awakening from Clive Bunker's solo album, along with the new instrumental, Ducks on the Pond.

This marked a triumphant return to the big stage (just listen to M.C. Danny Thompsons' reaction to the show), but problems with sound meant that the recording was unusable. So, resilient to the end, the band set up in the studio the following day and replayed the set, live without an audience, which makes up this album.
Oz Hardwick